New Book by a CES Fellow

Daanika Gordon, a CES Fellow in 2017-2018, has just published a book, Policing the Racial Divide: Urban Growth Politics and the Remaking of Segregation, with NYU Press.

The book, based on her dissertation, is described as follows:
A behind-the-scenes account of the harsh realities of policing in a segregated city. For thirteen months, Daanika Gordon shadowed police officers in two districts in “River City,” a profoundly segregated rust belt metropolis.

She found that officers in predominantly white neighborhoods provided responsive service and engaged in community problem-solving, while officers in predominantly Black communities reproduced long-standing patterns of over-policing and under-protection. Such differences have marked US policing throughout its history, but policies that were supposed to alleviate racial tensions in River City actually widened the racial divides. Policing the Racial Divide tells story of how race, despite the best intentions, often dominates the way policing unfolds in cities across America. 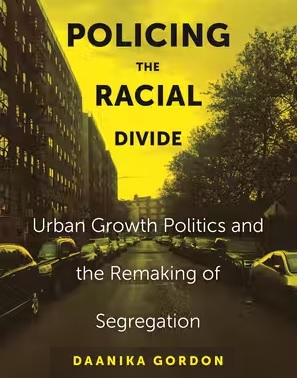 Drawing on in-depth interviews and hundreds of hours of ethnographic observation, Gordon offers a behind-the-scenes account of how the police are reconfiguring segregated landscapes. She illuminates an underexplored source of racially disparate policing: the role of law enforcement in urban growth politics. Many postindustrial cities are increasing the divisions of segregation, Gordon argues, by investing in downtowns, gentrified neighborhoods, and entertainment corridors, while framing marginalized central city neighborhoods as sources of criminal and civic threat that must be contained and controlled.

Gordon paints a sobering picture of modern-day segregation, and how the police enforce its racial borders, showing us two separate, unequal sides of the same city: one where rich, white neighborhoods are protected, and another where poor, Black neighborhoods are punished.

The book has been praised by other scholars:
In this book, Daanika Gordon explores unequal policing in a rustbelt city. She focuses on the police department’s decision to redraw its district boundaries in alignment with the city’s segregation boundaries, arguing that these districts were perceived—and policed—differently as a result. Policing the Racial Divide examines the origins and consequences of differential policing, showing us how it can further the uneven development of cities.” ~Jan Haldipur, author of No Place on the Corner: The Costs of Aggressive Policing

“Policing the Racial Divide deftly explores the history, logic, and police practices in two police districts in River City. Gordon shows us ‘two worlds of policing,’ where officers serve white, middle-class neighborhoods, but surveil and punish Black working-class neighborhoods instead. Ultimately, she highlights the important role that police play in the political economy of the city, serving the broader political, economic, and racial interests of an urban growth coalition.” ~Amada Armenta, author of Protect, Serve, and Deport: The Rise of Policing as Immigration Enforcement

To read read more about Daanika’s new book and to purchase it from NYU Press, click here.

← Previous
Manage Cookie Consent
To provide the best experiences, we use technologies like cookies to store and/or access device information. Consenting to these technologies will allow us to process data such as browsing behavior or unique IDs on this site. Not consenting or withdrawing consent, may adversely affect certain features and functions.
Manage options Manage services Manage vendors Read more about these purposes
View preferences
{title} {title} {title}