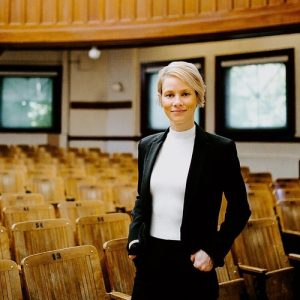 Madeleine Pape is a 2018-2019 CES Fellow who completed her PhD in Sociology at the University of Wisconsin-Madison in August, 2019. Her dissertation, entitled “Inclusion and Exclusion: Institutional Reproductions of Sex and Gender,” examined how scientists, policymakers, and certain feminists pursue scientific knowledge about “biological sex” and “sex differences” in particular as part of their approach to gender equity, with a focus on U.S. biomedical research policy and the regulation of inclusion in women’s sport. Madeleine’s work has been published in a range of sociological journals including Gender & Society, Body & Society, Social Studies of Science, Sociological Forum, and Sociology of Sport Journal.

Madeleine’s writing has also appeared in The Guardian and The Times, and her and her research have been featured on NPR’s 1A and Weekend Edition, PBS Newshour, Radiolab, BBC World Service and Newshour, and CBC Radio’s Q and The Current, among other outlets. She has also been consulted by the International Olympic Committee as part of their efforts to promote inclusive women’s sport, and served as a witness in the 2015 appeal to the Court of Arbitration for Sport of World Athletic’s Hyperandrogenism Regulations, brought by Indian athlete Dutee Chand.

Madeleine is currently a postdoctoral researcher at the University of Lausanne, having been a Science in Human Culture Postdoctoral Fellow at Northwestern University in 2019-2020.

Building on her dissertation research, her current book project explores the phenomenon of “biofeminism:” a political formation that seeks to root gender equity and women’s inclusion in a binary model of biological difference and which is characterized by the pursuit of “sex” as an object of scientific knowledge and regulation. The project explores the impacts of biofeminism on intersectionally inclusive gender equity in biomedicine and sport. Madeleine is also working with collaborators in the United Kingdom and Australia to build a Gender Inclusive Sport Lab, with the aim of redirecting current debates around inclusion in women’s sport away from regulation and towards constructive policy interventions that can foster the inclusion of sex and gender minoritized people in grassroots, collegiate, and elite and professional sport.

Madeleine’s engaged scholarly trajectory is deeply influenced by her background as an elite athlete. She competed for Australia in the women’s 800m at the Beijing Olympic Games in 2008 and at the World Championships in Berlin in 2009, where she raced against South African Olympic champion Caster Semenya. Madeleine seeks to use her unique athletic and academic platform to promote both nuanced public discussion on the regulation of women with high testosterone and novel contributions to feminist and sociological scholarship. Madeleine is also a dedicated teacher and has led courses on sociology of gender, gender health and medicine, and feminist technoscience at both UW-Madison and Northwestern University.