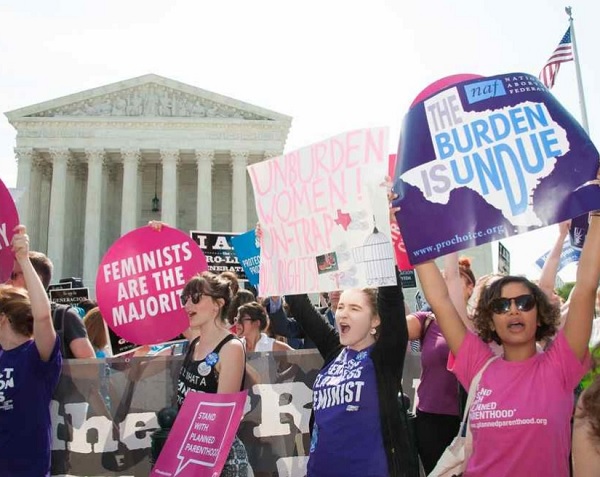 On June 27th, the Supreme Court ruled in a 5 to 3 decision, in the Whole Woman’s Health v Hellerstadt case that certain regulations of abortion clinics imposed by Texas were unconstitutional.  To read the New York Times article on the decision, click here.

The legislation required that abortion providers have admitting privileges at nearby hospitals and that abortion clinics meet the same standards as Ambulatory Surgery Centers, that is to become essentially small hospitals, requiring upgrades that could cost more than a million dollars. While the state claimed that these regulations were passed to protect women’s health, this was an obvious effort by anti-abortion politicians to restrict access to abortion.  Some 162 clinics have closed since 2010 in various “red” states, mostly due to similar restrictions.  Were the Texas legislation upheld by the Court, the number of abortion clinics in Texas would become less than ten, down from 40 before the legislation was passed.

The central issue in the case was an empirical question; what would be the actual impact of these regulations on the health of women in Texas?  This issue was directly addressed in one of the numerous friend of the court briefs submitted in this case, a brief of Social Science Researchers, signed by forty-seven scholars. The brief worked through the issues, systematically providing the evidence of the superior safety of abortion compared to other medical procedures that were not subject to such restrictions, and the negative consequences for women’s health   when access to abortion is either delayed or blocked.

The Social Science Researcher’s brief was cited several times in Stephen Breyer’s majority opinion. In Ruth Bader Ginsburg’s concurrence, she included the following observation:  “When a State severely limits access to safe and legal procedures, women in desperate circumstances may resort to  unlicensed  rogue practitioners, faute de mieux, [trans.”for better or worse”] at  great risk to their health and safety.”  Her reference is to another friend of the court brief filed by Ten Abortion Providers from Pennsylvania.  The specific citation is to the following quote in that brief:

”Carole Joffe, one of the leading academics in the field of abortion, has observed: In a horribly unfair vicious cycle, the poorest women often take time to raise the funds for an abortion, and then find themselves past the cutoff for procedures available early on – and facing a higher cost for an abortion. When women in these situations realize that they neither have the funds to pay for a later procedure, and/or can’t find a reputable provider that will perform their procedures after 24 weeks, they end up at places like [Gosnell’s clinic]. Carole Joffe, Learning the Right Lessons from the Philadelphia Abortion Clinic Disaster, RH Reality Check (April 16, 2013 10:11 A.M.)”

Carole Joffe is also, we are proud to say, a board member of the Center for Engaged Scholarship.  Carole’s analysis of the significance of Whole Woman’s Health can be found by clicking here.

This is a gratifying example of how engaged social science research can influence public policy at the highest level. With any luck, someday soon the Court will also draw on social science research to throw out all of the voter identification laws that have been passed with the rationale of protecting the election process from in-person voter fraud.  The cases are closely parallel; the actual intention is simply to block access to the ballot to groups that are likely to vote against the right wing agenda.