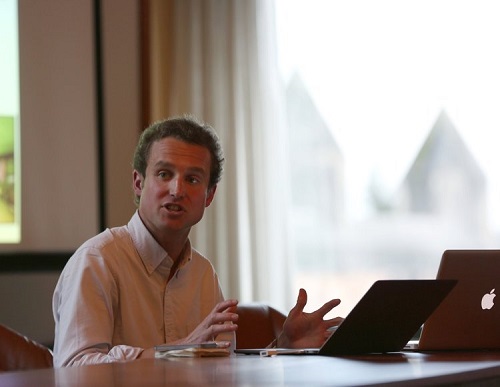 Chris Herring is a 2018-2019 CES fellow who is a doctoral candidate of Sociology at the University of California Berkeley, where he’s affiliated with the Global Metropolitan Studies Program and Center for Ethnographic Research and teaches undergraduate and graduate courses in Poverty, Urban Sociology, Social Theory, Qualitative Methods, and Pedagogy.

His research focuses on poverty, housing, and homelessness in US cities.  Chris’ work has been published or is forthcoming in academic journals including the American Sociological Review, Social Problems, City and Community, City, Teaching Sociology and book chapters in edited volumes of Anthropology, Urban Studies, Social Movements, Geography, and Community-based Research.  His writing has also appeared in the Washington Post, Places, Progressive Planning, Shelterforce, the Berkeley Journal of Sociology, and several homeless street newspapers across the US and Canada.

His work has been supported by the National Science Foundation, the Center for Engaged Scholarship, the Berkeley Law School’s Human Rights Center, the Empirical Legal Studies Workshop at the Center for the Study of Law and Society, the Sociological Initiatives Foundation, and the Horowitz Foundation.

Chris’ research, writing, and teaching embraces the ideals of public sociology.  He has collaborated on three major studies and publications with the National Coalition on Homelessness and San Francisco Coalition on Homelessness, the latter where he continues to organize as a member of their Human Rights Workgroup.  He has also collaborated on research with the Anti-Eviction Mapping Project, the Western Regional Advocacy Project, and ACORN.

Chris regularly consults with think-tanks, county governments, and legal aid groups. He is an editor and co-founder of the new Berkeley Journal of Sociology: an online-first graduate run publication of public scholarship aimed at broadening the interpretive range and prospective application of social research to political struggles, emerging cultural trends, and alternative futures.

Before coming to Berkeley, Chris completed an MA in Social Anthropology at Central European University, Budapest, Hungary (2010) and a BA in Economics from Bard College (2008).  He also worked as a Project Manager in New York City’s Department of Housing Preservation and Development.

To learn more about Chris’ work, visit his website by clicking here.